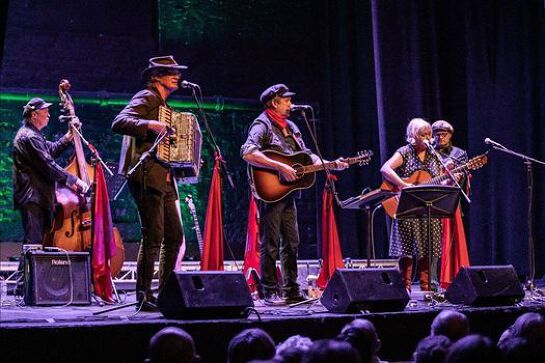 MEMO Live Streams is pleased to present A Tribute to Woody Guthrie - Bruce Hearn & The Machinists with special guests Margret RoadKnight, Kerri Simpson and Jan ‘Yarn’ Wositzky (of The Bushwackers).

Despite years of performing with bands, Bruce is at heart a singer/songwriter, as well as an accomplished guitarist, banjo and harmonica player, and 2017 saw him step back in to folk music by organising and leading a series of sell-out ‘Songs of Freedom: A Tribute to Woody Guthrie’ concerts. It is from one of these concerts that “Live at the Athenaeum: A Tribute to Woody Guthrie” is drawn. With twenty tracks in total, the album, which was recorded at Melbourne’s historic Athenaeum Theatre, has Bruce joined by folk legends Eric Bogle, Margret RoadKnight, Jan ‘Yarn’ Wositzky, Kavisha Mazzella, Mic Conway, Kerri Simpson and others, as well as the thirty-strong Victorian Trade Union Choir. It is a historic record of Australian musicians commemorating the humanity and musical genius of (arguably) the 20th Century’s greatest folk balladeer, Woody Guthrie.

Bruce will follow up the Woody album with his own first solo album proper - another double album - “The Word Is The Music The People Are The Song” in the early months of 2021.

Singles – BRUCE HEARN & THE MACHINISTS "THIS LAND IS YOUR LAND" and "LONESOME VALLEY” – out now.