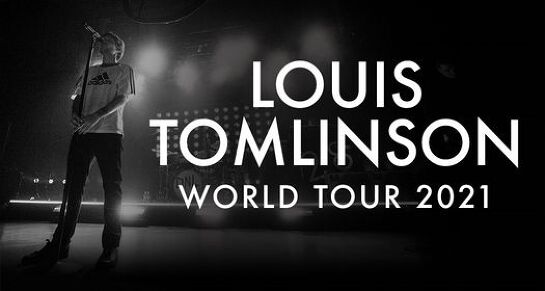 LOUIS TOMLINSON has returned with his joyous new single ‘We Made It’, an ode to teen dreams and young love, which fuses both the euphoric indie influences of Louis's teen years with more contemporary electronic pop sounds – out now. Alongside the release of the single, Louis announced a World Tour for 2020 that will visit London, Glasgow, Doncaster and Manchester, alongside Europe, UAE, Indonesia, Australia, New Zealand, Japan, Brazil, Paraguay, Argentina, the USA and Canada. In Australia, Louis will perform two headline shows beginning on Saturday, April 25 at the Big Top in Sydney and at Melbourne’s iconic Palais Theatre on Monday, April 27.

The new track is inspired by stolen nights out in Manchester in the early days of One Direction. “Any time off I had, I’d go to Manchester for nights out with my mates. It made me realise I didn’t live in the real world anymore and I missed it. I loved being normal, reckless and stupid. It was the best escape. We’d stay up all night, talking about our dreams and what we thought would happen to us. That age is such an exciting time. You’ve no idea what the future holds, but you have so much potential. Where is my life headed? Who knows?"

“The chorus of ‘We Made It’ is also about me and the fans. Between us, it has taken a lot to get here. I’ve had to work really hard, had to learn about so much about myself. I feel as though only when I get out to tour, to sing these songs directly to the fans, will I have cemented the start of my solo career.”

Last week, Louis revealed that his debut solo album “Walls” will be released on January 31, 2020. The album is now available to pre-order – go here. Louis also premiered the first episode of his new YouTube video series. Watch it here.

Ask Louis why he only recently felt ready to record a solo album and is only now itching to be back on stage and he’ll tell you straight – the songs. His run of hits in 2017, including hugely successful collaborations with Bebe Rexha and Steve Aoki, were in retrospect a mere dipping of toes in the water. Temperature tested he made some decisions – Louis wanted to be an artist who had his own sound and something to say. Chasing chart positions and radio play had to take a back seat to making music that meant something to him and, in turn, to those all-important fans.

“There was definitely a process of understanding where I sit musically,” says Louis. “I have my own tastes and, to a certain extent, they are fighting against the musical tide. “When I grew up, pop meant Arctic Monkeys, Oasis, The Killers and Amy Winehouse. Times change, obviously. Currently pop is very urban and street, which is not what I relate to. Sure, I could make those sort of songs, but they wouldn’t feel like me. The puzzle was how to please both myself and the fans.”

Louis recently headlined the Coca-Cola music festival in Madrid to an audience of 25,000 people. Earlier this year, Louis picked up the Best Song Award at the 2019 Teen Choice Awards for his recent single 'Two Of Us', which has so far hit 40 million streams on Spotify, with YouTube views at 23 million. In 2018 Louis won an iHeart Award for 'Best Solo Breakout', and an EMA Award for 'Best UK & Ireland Act' in 2017. He was ranked No.5 on Billboard’s emerging artists of 2018 and has over 60 million combined followers on social media.

As a member of One Direction, Louis has sold over 100 million records. Overall Louis’s solo music has garnered over a BILLION streams.

“I feel like a new artist now. It’s taken a while for me to be comfortable on my own, to learn to trust my gut and make sure I get what I want. I feel the most confident I’ve ever been, both as a songwriter and a singer, and the most mature. Of course I want to be successful, but what matters is what my music means to me and what it means to the fans. That’s the priority. The rest we’ll have to wait and see.”

Prohibited Items: No video, audio or professional photography unless stated otherwise by the promoter. No alcohol or open drink containers can be brought into the venue.

Seating in Lounge Rows A-D is strictly NO STANDING. It is strongly recommended any patron who has requested an Outlet/Venue pickup when purchasing should pick their tickets up prior to arriving at the Palais Theatre on show night to avoid lengthy queues.

This is a digital only event. All Tickets are Mobile Ticket Only. Tickets can only be purchased via the Ticketmaster website or Ticketmaster App*

*Accessible ticket options excluded and are still available via the Accessible Seating Line. Mobile Tickets are like Print-at-Home tickets but instead of having to print off the tickets yourself, you can just show the barcode on your mobile phone. It is the easiest way to access tickets to your events. For more information visit Ticketmaster.com.au/mobiletickets