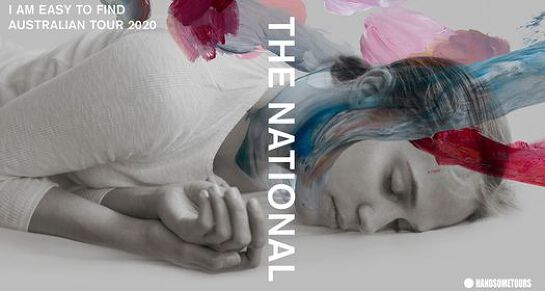 For their upcoming tour, The National will nestle into their most intimate Australian venues in a decade, delivering fans the raw intensity and emotion of their live show, up-close-and-personal like never before. Be quick - tickets will not last!

The band's most recent release I Am Easy To Find was a collaborative project with director Mike Mills. The results are I Am Easy To Find, a 24-minute film by Mills starring Alicia Vikander, and I Am Easy To Find, a 68-minute album by The National. The former is not the video for the latter; the latter is not the soundtrack to the former. The movie was composed like a piece of music; the music was assembled like a film, by a film director. The frontman and natural focal point was deliberately and dramatically side staged in favour of a variety of female voices, nearly all of whom have long been in the group’s orbit. It is unlike anything either artist has ever attempted and also totally in line with how they’ve created for much of their careers. The two projects are, as Mills calls them, “Playfully hostile siblings that love to steal from each other”—they share music and words and DNA and impulses and a vision about what it means to be human in 2019, but don’t necessarily need one another. I Am Easy To Find was produced by Mike Mills and The National at Long Pond, Hudson Valley, NY.

Joining The National on all dates will be special guest Phoebe Bridgers. Hailing from Los Angeles, Bridgers released her debut album Stranger In The Alps in 2017 to international acclaim, with haunting, introspective songs that garnered widespread comparisons to legendary songwriters like Elliott Smith and Joni Mitchell. In the last 12 months, Bridgers has continued with a prolific release schedule; teaming up with Julien Baker and Lucy Dacus to release an EP as boygenius and joining forces with Conor Oberst for a full-length album under the guise Better Oblivion Community Centre. She returns to Australia following sell-out headline shows in Sydney, Melbourne and Brisbane earlier this year.

No video, audio or professional photography unless stated otherwise by the promoter. No alcohol or open drink containers can be brought into the venue. Seating in Lounge Rows A-D is strictly NO STANDING. It is strongly recommended any patron who has requested an Outlet/Venue pickup when purchasing should pick their tickets up prior to arriving at the Palais Theatre on show night to avoid lengthy queues.