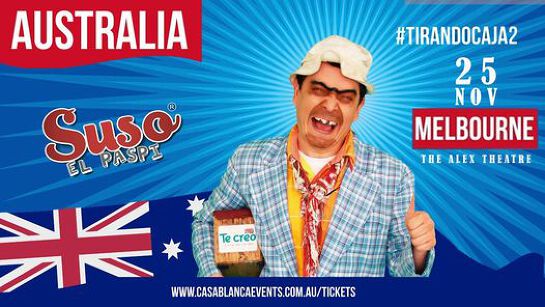 Proudly brought to you by Casablanca Events:

This will be a Spanish spoken show.

Colombian comedian and TV superstar is coming to Melbourne!!!

With more than 2 million Facebook likes an 4 million viewers weekly throughout the Colombian national TV, Suso El Paspi is without a doubt one of the most recognized and famous Colombians in the world.

For one night only you have the opportunity to see a full 2 hours show of the most amazing and authentic Colombian comedy.

Do not miss out, tickets will go fast...

This character that was created and is interpreted by Dany Alejandro Hoyos S., is an embolador that has the peculiarity of including the letter "S" between the words and although its appearance is not the most attractive, with its "mueco", its form of quirky dress, dark circles and shaved hat has managed to be loved by women and admired by men, since Suso the Paspi, is the demonstration that the important thing is the essence of things, as they say: "the important thing it's the personality. "Suso is a single man, average Colombian, simple, of humble extraction a slogan of "profession" Waged for a salary below the minimum wage, It says to be exploited by who they are and have been their bosses.Live in Altos de Chupamestepenco.

Suso el Paspi was born as a theatrical proposal in Tutucán, on December 8, 2000 there was part of the cast of typical characters that represented the culture of Antioquia. In the year 2008 Suso decided to leave the town and become his ambassador in the world with a style formed in Tutucán, fresh, spontaneous, respectful, original and full of improvisation and interaction with the audience.

This is how with his idea of becoming an ambassador in the world begins to become tangible, Suso in January 2009 responds to the call of the Germán Carvajal comedian and joins the cast of GOOD IS BETTER Telemedellín channel, a television program of the Mayor's Office of Medellin, where the Paspi made an appearance of 5 minutes. Immediately, it was gaining strength and recognition from viewers.

In June 2009 he premiered his work TIRANDO CAJA CON SUSO, a theatrical comedy that reflects the Colombian identity through the story of the most important events in the character's life, with total success. his education, his different jobs, his loves and his family. This work has filled theaters in several cities of the country, which shows the great reception by the public from different regions, also has had a presence in different cities in Spain such as Tarragona, Barcelona, Madrid, Bilbao and Seville. In December of that same year he started his own television program called "The Suso's Show" broadcast by Telemedellín every Sunday.This was consolidated as the most watched national program at the national level and the most watched on the internet in Colombia, the program was so well received that in a few days it achieved the highest rating in the history of the local channel and its success lies in the spontaneity of the character.