From 12 midday Tuesday 22 September until 6pm Saturday 24 October 2020 we must comply with special arrangements in the lead up to the 2020 Council Elections in the City of Port Phillip. We won’t be publishing event listings during this period.

We’ll return to regular operations on Monday 26 October and in the meantime, you can still contact Council. 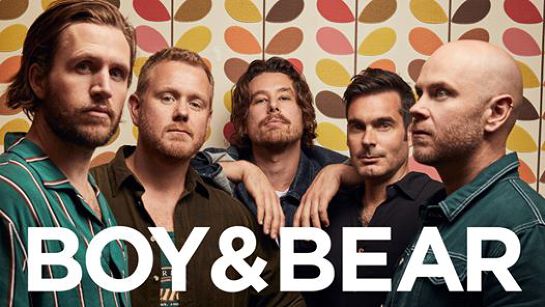 The band first garnered attention when they uploaded their song ‘The Storm’ to triple j Unearthed in 2009. Their debut album ‘Moonfire’ (2011) reached double-platinum sales, winning them five ARIA Awards and three songs in the triple j Hottest 100. Their sophomore album ‘Harlequin Dream’ (2013) achieved platinum sales and #1 on the ARIA Album chart, staying in the top 10 for five weeks. The band followed this up with ‘Limit Of Love’ (2015) which resulted in their second ARIA #1 album debut.

After touring the world multiple times, becoming Splendour In The Grass favourites, performing on Conan O’Brian, and selling out two consecutive Sydney Opera Houses, this iconic Australian band returned with their triumphant release ‘Suck On Light’ (2019).

Boy & Bear have partnered with Plus 1 to benefit Support Act and its mission to helping artists, crew, and music workers who are facing hardship due to illness, injury, or some other crisis that impacts their ability to work in music. $1 from the sale of each ticket will benefit the Greg Weaver Help a Mate Appeal.